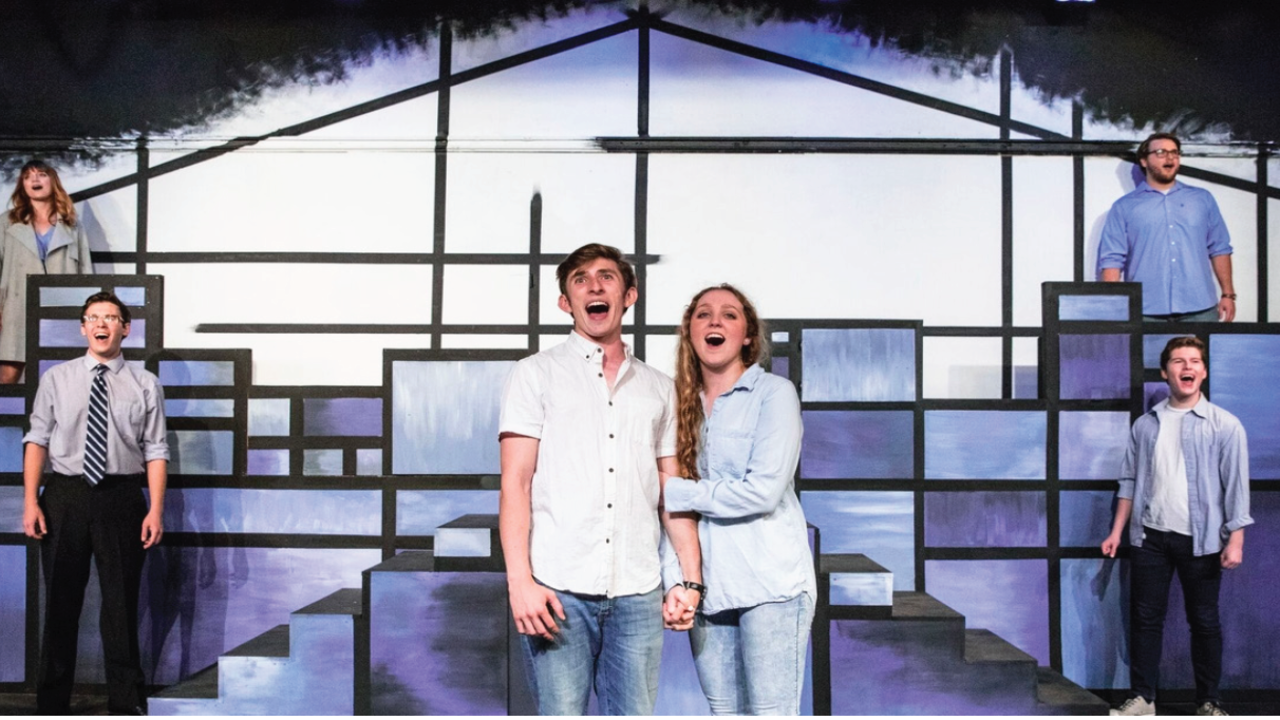 Photo of Next to Normal by Austin Dalgleish, Musical Theatre Repertory at USC, 2018.

Romance and romantic entanglements are the fuel of traditional musical theatre, fusing words and music (Engel and Kissel 113) to create entertaining and successful shows with happy endings. Frequently, these happy romantic resolutions reinforce gender hierarchies and heteronormative stereotypes: "Women wait for love, men bring it" (Barnes 51). Tom Kitt and Brian Yorkey’s 2009 musical Next to Normal, in subverting the audience's expectations both for a "normal" heroine and a happy ending, deviates from the conventions of musical theatre and provides an interesting case study of accepted notions of the traditional, integrated musical.

When Wicked opened in 2003, it initiated a new sub-genre of musical theatre: female empowerment, or girl power musicals (Wolf 23). These shows feature strong women who shape their own destiny. These female figures don’t need men to succeed; often men need them. Celie (The Color Purple, 2005), Elle Woods (Legally Blonde, 2007), Jenna (Waitress, 2015), Alison Bechdel (Fun Home, 2013/2015), and most recently the pants-wearing princesses themselves, Elsa and Anna (Frozen, 2017), are other examples.

Not everyone appreciates this strand of musical theatre. New York Post columnist Michael Riedel declared that while "Female empowerment is fine for daytime television. . . . it’s flesh-crawling in a musical." And Terry Teachout has speculated that female empowerment doesn’t provide enough dramatic propulsion to generate the impetus to sing, something he feels is only inspired by "the life-changing idealism inherent in the search for (in Sondheim’s words) 'someone to make you come through, / Who’ll always be there, / As frightened as you / Of being alive'."

Next to Normal falls within this sub-category of musical theatre. The musical eschews some of the standard tropes of the conventional Broadway musical, employing rock music to underpin themes of mental illness, grief, family dynamics, and self-preservation. The piece unsettles "patriarchal expectations" (Taylor and Symonds 146). Next to Normal’s central female protagonist (Diana) could be read as a weaker character by virtue of her mental illness. Indeed, Kitt and Yorkey initially appear to be playing out the "cure fantasy" (Fox 776) that we often witness with disabled characters (cf. Nessarose in Wicked) as Dan and Diana seek a cure for her disability so they can live "normal" lives. However, it soon becomes apparent that Diana is a heroine rather than a damsel in distress, and one could argue that it is her husband, or even her daughter, who is more in need of "rescue."

While Next to Normal does feature love stories and employs the traditional two-couple framework of musical comedy (Dan/Diana, Natalie/Henry), Diana's decision to walk away from her family transforms the script’s dramatis personae. Diana's transformative climactic moment allows the characters to grow (Dan recognizes his own grief and takes steps to address it; Natalie becomes more open with Henry). The show eschews the nearly universal "marriage trope," whereby jagged edges are smoothed by romantic union, often at the expense of female autonomy and identity. This musical instead employs what Raymond Knapp has termed "the divorce trope," in which a woman "creates the sensibility of a musical by leaving an existing unworkable reality to invent herself" (2009, 822). Diana character arc moves toward leaving as well as embracing her disability:

And anyway, I’m leaving
I guess that you can see
I’ll try this on my own
A life I’ve never known
I’ll face the dread alone
But I’ll be free

Kitt and Yorkey are also working with and against other musical theatre traditions.

Since the heyday of Rodgers and Hammerstein and the birth of the integrated musical, integration has been the goal of the well-crafted musical. The goal was to flow effortlessly between song, scene and dance, conveying the stories to an audience apparently unaware of shifts in the mode of communication. More recently, however, Scott McMillan has argued that the driving factor in musical theatre is not seamless integration but rather "the crackle of difference" as the musical shifts between "book time" (scenes) and "lyric time" (songs) (6-10).

In Next to Normal, this dynamic tension is succinctly demonstrated by the six-minute song "Who’s Crazy/My Psychopharmacologist and I," which contains short scenes between Diana and Dr. Fine, and Natalie and Henry that mark the progression of time: "Goodman, Diana. Bipolar depressive with delusional episodes. Sixteen year history of medication, adjustment after one week" (Kitt and Yorkey 18). Next to Normal spends nearly eighty per cent of the show in "lyric time," which Raymond Knapp refers to as "suspended animation" (2009, 12). This sustained immersion in suspended time allows Kitt and Yorkey to develop their characters while upping the emotional ante of the show through music. Despite the spoken interjections in "Who's Crazy," audiences are never fully released from the emotive pull of lyric time because the whole sequence is underscored. Interestingly one of the only music-free moments is Dr Fine’s final "Hmm. Patient stable," although the discordant musical motif leading up to this contradicts Fine’s words (Kitt and Yorkey 22). It is not a stretch to see that Next to Normal has influenced other musicals that have followed it: ninety-five percent of Hamilton is spent in lyric time, and in one of the show’s most moving moments —when Hamilton is informed of Laurens’s death—the music stops. (To determine lyric time, the album running time is subtracted from the show's total running time to identify the time difference, and then this is calculated as a percentage.)

Kitt and Yorkey reference music and lyrics from more traditional, "integrated" music theatre experiences, even as they disrupt the form. Even the show's original poster, which exhibits a staff of musical notes in both "normal" and "distorted" formats signals that something unusual is happening here. Kitt and Yorkey make both musical and lyrical references to Rodgers and Hammerstein's "My Favorite Things" in listing the various medicines that Diana is being prescribed:

Zoloft and Paxil and Buspar and Xanax...
Depakote, Klonopin, Ambien, Prozac...
Ativan calms me when I see the bills—
These are a few of my favorite pills.

The tonality of the original melody has shifted to achieve a more melancholy feel—at odds with the associations we have with the original tune and its upbeat rhythms. Tying the two musicals together invites a comparison of musical-theatre writing styles and draws a comparison between the stories of motherhood enacted by Diana and Maria. Hamilton invites a different kind of comparison by using the same device (and the same composers) when Aaron Burr raps, "You've got to be carefully taught."

Besides Hamilton, it is possible to see the echoes of Next to Normal in other shows. Pasek and Paul’s Dear Evan Hansen tackles anxiety, depression and the aftermath of a suicide. Here, as in Next to Normal, the dead character at the heart of the show (in this instance Connor Murphy) reappears at key points dancing and singing with Evan. Waitress sees the main character Jenna break away from an abusive relationship with her husband Earl. Her separation from her husband is not the only "divorce trope" within the show: Jenna also ends an affair she has been having with her gynecologist, Dr. Pomatter, as she doesn’t want to settle for "happy enough."

Next to Normal is innovative but it is not faultless; once again a woman carries meaning rather than creating it, since the female voice is being imagined by male writers (Harris 56). Scott Wallin has also highlighted that the Goodmans are "models of normalcy" (Wallin cited in Fox 790) so their experience of mental health is more palatable than the reality, sanitized for entertainment purposes and free from any financial exigencies. However, the show unquestionably breaks new ground. As Scott Miller notes, musical theatre is "among the most powerful tools for social change in the world today, partly because it’s sneaky; it does its job without its audience noticing" (viii). Next to Normal deserves to be lauded as the groundbreaking—and form-breaking—work it is.

GET YOUR COPY
Close