Navigating the Journey of the Song: Turn-by-Turn Direction 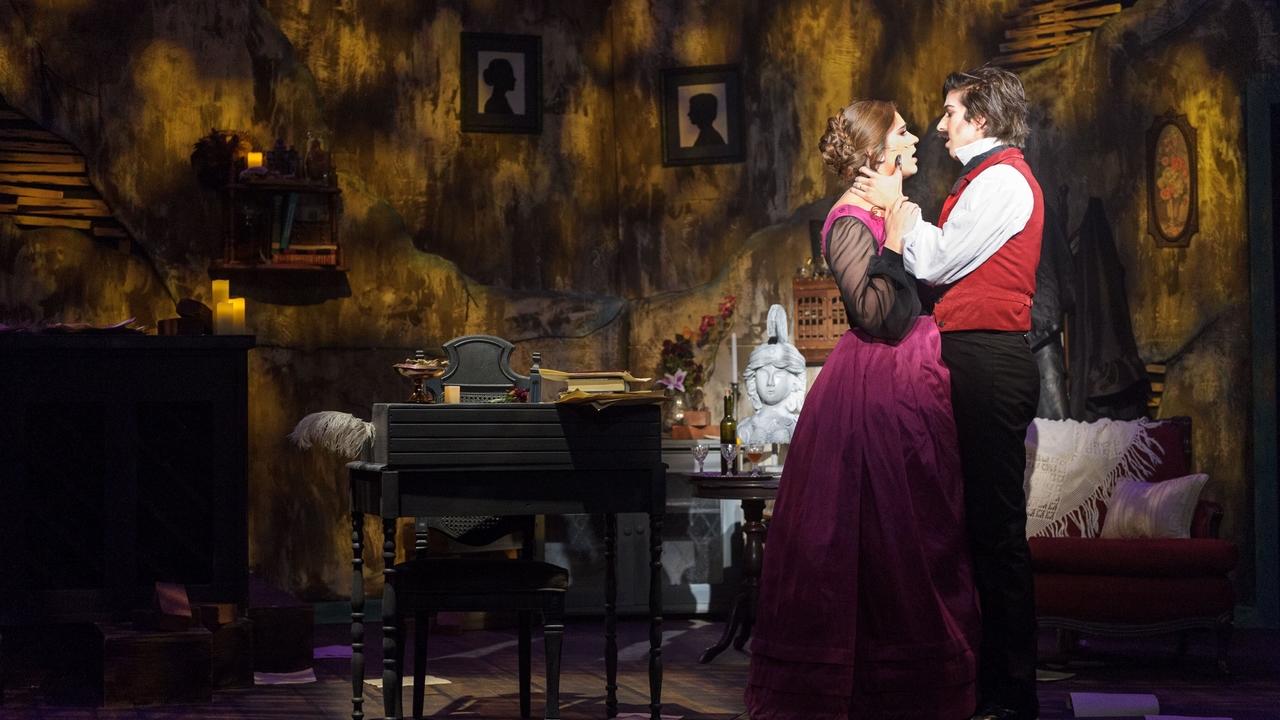 It’s not hard to discern that journey in songs of persuasion like “The Surrey With The Fringe” from Oklahoma!, “Some People” from Gypsy, “I’d Be Surprisingly Good For You” from Evita, or in narrative songs like “Opening Doors” from Merrily We Roll Along. But many theater songs are contemplative songs in which dramatic time “stops” so we can savor a moment. Pieces like “Easy To Be Hard” from Hair and “What Did I Have That I Don’t Have?” from On A Clear Day give the character a chance to analyze what’s happened, ask questions, and consider possible future actions; they give the dramatist an opportunity to deepen the listener’s understanding and empathetic experience of the dramatic event.

These songs don’t journey through actual time and space; rather, they explore an inner landscape of memory, fantasy, and desire. Sometimes that exploration can lead to discovery and change, but just as often, the character ends the song exactly where they began. Still, the listener always goes on a journey when a song is sung, so it's my contention that both persuasive and contemplative songs can benefit from being examined through the lens of the “journey.”

One of the most useful aspects of the journey metaphor is that it calls attention to the way a journey is constructed: a series of individual segments or events (the so-called “legs” of a journey) separated by navigational maneuvers (the “turns”) when a change of direction is required. Each segment of the journey must be completed before you can begin the next one. And, regardless of whether the terrain you travel is familiar or unknown, there's always the possibility of an unexpected occurrence that may require you to adjust your route.

Nowadays, all travel is made simpler by the use of GPS, which offers us a segmented route, broken down into "turn-by-turn" directions.This idea of turn-by-turn directions can be adapted for teaching the journey of a musical theatre song. For this discussion, I'll use “I’ll Be Known,” from the 2013 musical Leading Lady, which I wrote with playwright P. Seth Bauer.The song is an example of an “I want” song: a chance for the protagonist to sing of the deeply felt desires that will motivate their actions in the scenes that follow. 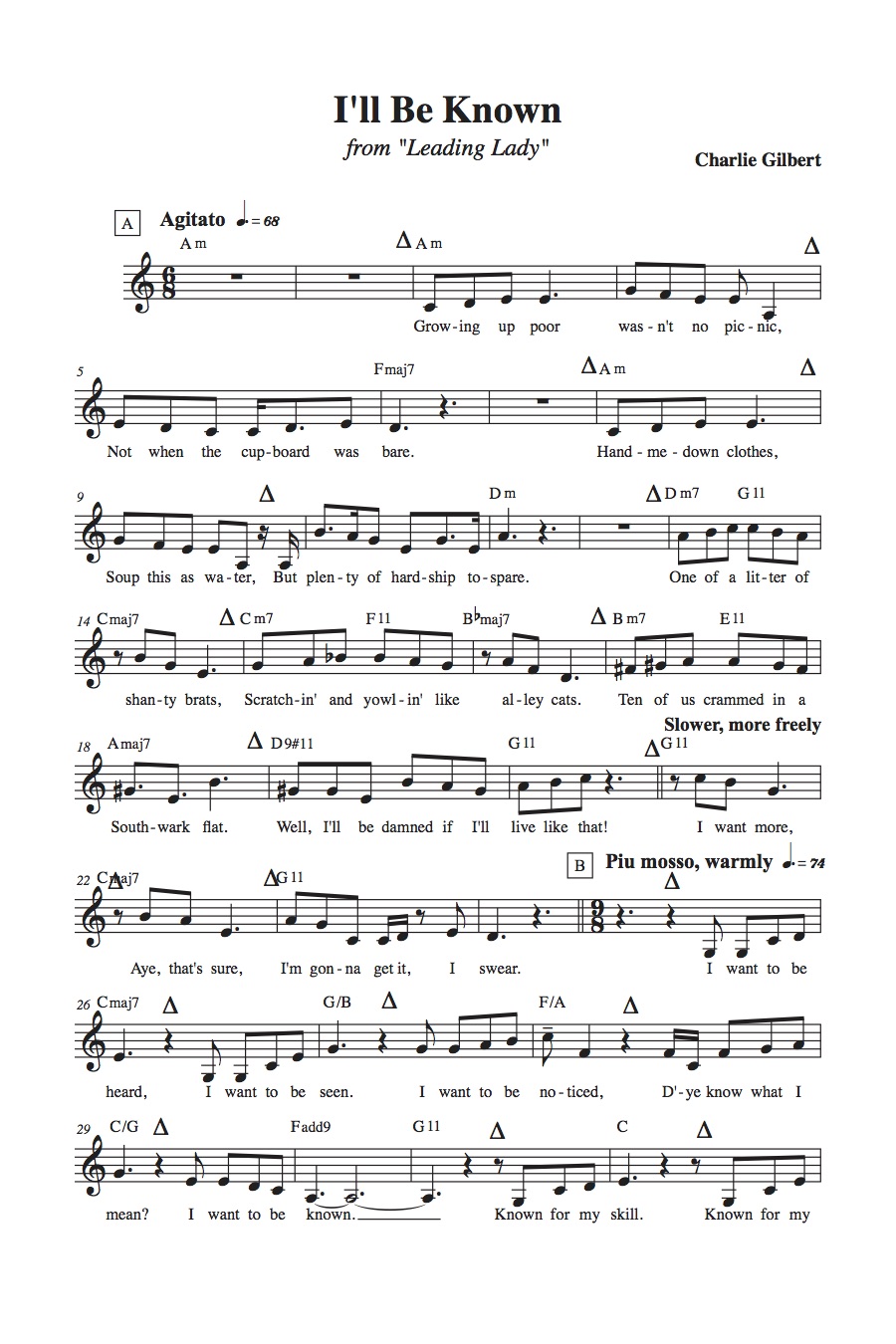 It appears in lead sheet form above, and a piano/vocal version is available for download at www.savisingingactor.com/book-extras.

You'll notice that there are a number of small triangle markings throughout the music.The triangle is the symbol for the Greek letter delta, which is used in the world of physics and math to denote change. A triangle is also a musical instrument whose sound is a distinctive "ding." For this reason, I refer to the moments of change in a song as "dings," and when I coach students, I often use the sound of a bell or chime as an actual, audible "ding" to indicate moments for change. When analyzing a song, you'll need some common signposts that indicate a "ding" or moment or change.

In the lyrics, punctuation marks (periods, question marks, commas) frequently warrant a ding, as do conjunctions (words like but, or, unless, although).The beginnings or ends of vocal phrases and long, sustained notes should also be considered as possible indications of a "turn" in the song.

Each new phrase - each “leg” of the journey, as it were - presents a unique opportunity for specific expression or communication.The delta can be used to mark where every phrase begins. It is helpful to write out the lyrics, with one line per ding, like this:

∆ Growing up poor wasn’t no picnic,

∆ Not when the cupboard was bare.

∆ But plenty of hardship to spare.

∆ One in a litter of shanty brats,

∆ Ten of us crammed in a Southwark at.

Next, at each "ding," make a specific choice about subtext, action, or paraphrase for that lyric that differentiates it from the previous lyric:

#1 Growing up poor wasn't no picnic,

#2 Not when the cupboard was bare.

#5 But plenty of hardship to spare.

#6 One in a litter of shanty brats,

#8 Ten of us crammed in a Southwark at.

#1 Shock the listener with the harsh reality about your past

#2 Give a corroborating example

#3 Give a more specific example

#4 Give a different kind of example

#6 Describe yourself using insulting language you heard as a child

#9 Sharp turn: Enough of the past! You’re done with that!

Just as there are a handful of common maneuvers that a driver makes during an actual journey, the “maneuvers” that one makes in the transitional moments of a song fall into some basic categories, including:

• “And” - an elaboration or intensification of the previous phrase, like phrases 3 and 4

• “But” - a new phrase that significantly contrasts with its predecessor, like phrase 5

• “New” - like a beat change, or a shift. In this case, phrase 6 changes the subject from hardship to family relationships, and phrase 9 closes the door on the past and introduces the new subject of the future.

• Parenthesis/Detour (“New” + “Back”) - a parenthetical expression, or a kind of detour, where the argument appears to take a new direction, only to return back to the previous direction a moment later.

Recognizing these common patterns helps clarify the relationship between consecutive phrases and identify appropriate behavior that will clearly communicate the transitions that take place during the song.

The final lines of the song “I’ll Be Known” are a dramatic re-statement of the title phrase: “Perhaps I won’t be famous/But dammit, I’ll be known!” A big build-up in the accompaniment and a climactic high note announce to the listener that they’ve arrived at the final moment, the culmination of the soul-searching journey of the song. Endings are always a big deal in a musical theater song, but for an ending to have its desired impact, the performer needs to have led the listener carefully through each “leg” of the journey.

Turn-by-turn directions for the journey of the song reduce stress for the performer even as they increase clarity and variety for the listener. If the listener gets lost, the journey of the song will be ultimately unsatisfying. Navigating that journey, one "turn" at a time, is a key skill for the singing actor to master.Thoughtful analysis and careful crafting of behavior are strategies that any singing actor can use to make a song a powerful dramatic performance.

This article is adapted from The SAVI Singing Actor by Charles Gilbert. Learn more at savisingingactor.com.