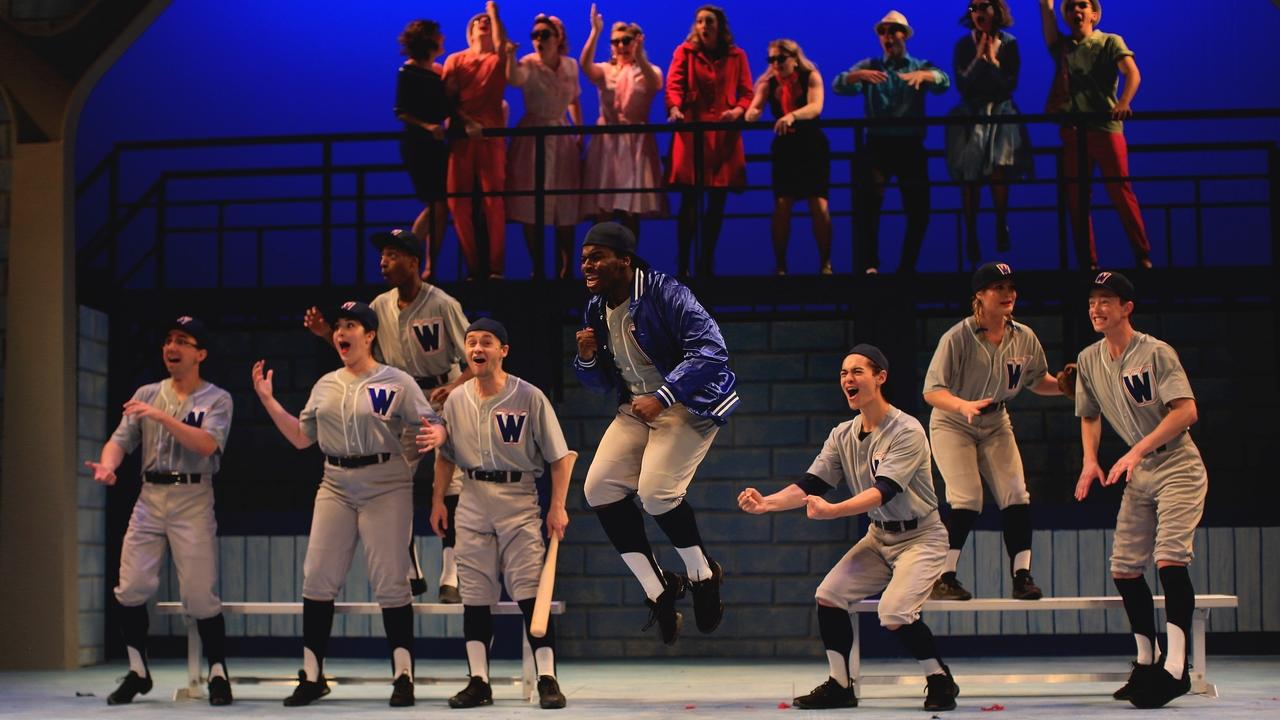 Evelyn Clark argues that while there is no singular American masculinity, many men still define masculinity as having "physical strength, economic success and reliability, logic, wild streaks, being unemotional, and never seeming feminine. Men are expected to be tough, never cry, provide for their families, and most importantly be heterosexual” (399).These same attributes ("Dominance.Aggression.Rugged good looks...Sexual prowess.Stoicism.Athleticism.Wealth") were named by teenage boys in a 2018 study in a very recent The Atlantic magazine article (Orenstein).

Those of us who work in the musical theatre understand that some of our favorite shows were written with this archetype in mind, but as our society becomes more inclusive of diverse gender identities, and as terms such as "toxic masculinity" begin to inform our perceptions of gendered behavior, these older, once-considered-normative masculine behaviors are changing, and may even seem foreign to younger students.

An understanding of the gender demands embedded in a role as well as empathy for the confusion that might be felt by younger actors led me to develop a classroom exercise I call Masculinity Workshop. My goal was to give younger actors a way to conform to a particular director’s concept of masculinity, or to embody the gendered demands of a role as required by the script.

In her essay, “On the Gender Continuum,” Stacy Wolf suggests a continuum, where gender exists on a spectrum of 1 to 10 with masculinity being a “1” and femininity being a “10” (172). However, for my workshop, I modified this spectrum in order to specifically explore a range of masculine behavior. I labeled “1” with the term unconventionally masculine and “10” with the term conventionally masculine. (You may reverse these numbers if you prefer.)

Conventionally masculine may be defined as socially valued traits and expectations that constitute a perception of “maleness,” in ways similar to Clark's description, above. Conversely, unconventionally masculine may be defined as traits that differ from this traditional description of manliness and may in fact suggest effeminacy, but still allow the individual to be recognized as male. It should be emphasized that this Workshop activity applies to gender, and should not be conflated with sexual orientation.While some performances of gender may coincide with certain stereotypes of sexual orientation, they are not exclusively tied to those identities.

To begin the Workshop, this continuum should be posted on a blackboard or across several large sheets of paper to demonstrate the expanse and to allow for writing/contributions. It will be referenced throughout the workshop.

Participants are then asked to walk around the room exploring a “10,” embodying any of the traits they perceive in the conventionally masculine celebrities listed. After some time, I ask them to interact with each other physically and verbally. Once they have a reasonable experience as a “10,” they repeat the process as a “1,” using the unconventionally masculine celebrities. Finally, I instruct them to repeat the process as a “5.” After experiencing the three varying numbers, I ask for reflections on the experience and list participant responses under their respective numbers.

This combination of celebrities, numeric values, and traits creates a contextualized Masculinity Scale for the group. With masculinity now quantified, I ask volunteers to share where along the scale they personally fall in their performance of masculinity, keeping in mind that it may be a range rather than a precise number. (Always ask for volunteers; participants should never be compelled to share their personal performance of gender on the Masculinity Scale.) Ultimately, this creates a reference point from which to work as I segue into a discussion of characters in musical theatre and “The Gap.”

An actor’s personal range of masculinity may be lower or higher than a character’s range of masculinity. A director might register Curly from Oklahoma! as an “8” on the Masculinity Scale, but her students auditioning might peak at a “6.”The issue becomes how to close this gap so that an actor can perform their character’s gender—as called for in the text and the story, or in the director's vision—as accurately and comprehensively as possible. It may be unrealistic to expect an actor who performs a personal range of “2” to “5” to portray a believable “10.” Nevertheless, some adjustments might be made to bump up that actor closer to an “8.”

CLOSING THE GAP: PHYSICAL AND VOCAL USE

Because gender performance relies entirely on the reception of mannerisms and other social cues by others, small adjustments can be made to change the perceived performance of gender (Butler 419). In my workshop, I start by focusing on changeable physical traits with particular attention to where tension is held or released.This begins with the face, identifying where tension can be applied to the jaw, lips, and eyebrows. Frequent reference is made to the Masculinity Scale to remind the students of what it felt like to be a “10” as opposed to a “5” or a “1.”

The next focus is posture, which encompasses the carriage of the head, shoulders, and arms.This also includes noting the presence or lack of tension in the hands, as well as their placement.The important thing to remember is that each body is different, and therefore, each performance of masculinity will be read differently, which is why a diverse list of celebrities is encouraged; not every student will adhere to the masculinity performed by straight, white, cisgendered men. Where engaged facial or shoulder muscles work well to convey masculinity for some students, others may register as more masculine by keeping those same muscles relaxed.

Next, explore where the actor holds their weight. Do they have a narrow or wide stance? Do they sit back on their heels or lean forward onto the balls of their feet? Are their knees parallel and relaxed or has the actor sunk into one of their hips? The alignment of the hips and the spacing of the feet can read differently. For example, standing on one leg with the hip popped and the other slightly turned out might read as lower on the scale than treating a leg like a pillar with both feet parallel. Finally, engaging in a walk allows the actors to explore what it feels like to lead with the head, the heart, and the pelvis, each in turn, and also allows the rest of the group to reflect how each activity raises or lowers the perceived masculinity.

The advantage of isolating these physical traits is that by attributing numeric value to them from the Masculinity Scale, a director or coach now has a point of reference from which ask for adjustments. For example, she might now be able to ask of an actor to perform the face at a “4,” the shoulders at a “7,” and a walk from the chest at a “6” and, thus, quite literally build the desired physical/behavioral performance of masculinity for the character. Additionally, this helps eliminate problematic language often used by directors such as “play it straighter” or “be more macho,” or "man up," which an actor might take as an affront to their personal performance of gender.

The voice is also a gender "marker," telling us a great deal about a character.What happens if the voice sounds brighter or darker? Changing the placement of the voice, such as bringing the sound forward, dropping it into the chest or throat, or sending it into the mask or head, all affect the resonance. As referenced in the chart of masculinity traits above, students tended to associate a lower vocal range with conventionally masculine people, and so playing with where sound will ring most authentically for an actor striving for said masculinity is necessary.

Finally, diction and cadence should be examined. Sibilance, plosives, and fricatives can translate greater or lesser masculinity depending on the delivery. Indulging in the word “freakin’” closer to the front of the mouth might convey less masculinity than a staccato delivery of the same word from further back in the mouth. Similarly, the cadence of speech affects perceived masculinity: sing-song speaking is often associated with femininity and monotone more commonly linked to masculinity. Although there are some "rules," results will vary with the individual actor.

Characters in musicals will frequently have a different gender performance than the actor playing them. Identifying the required or expected behaviors for a particular character as well as the "gap" separating the actor from the desired character portrayal can create a
shared vocabulary for actor and director.Working in this way also eliminates the need for any discussion of the actor's personal level of masculinity: it is understood that all gender is performative and created; it's not inherent in the person, and one behavior is not more or less valuable than another.

Orenstein, Peggy. "The Miseducation of the American Boy." The Atlantic, January/February 2020.