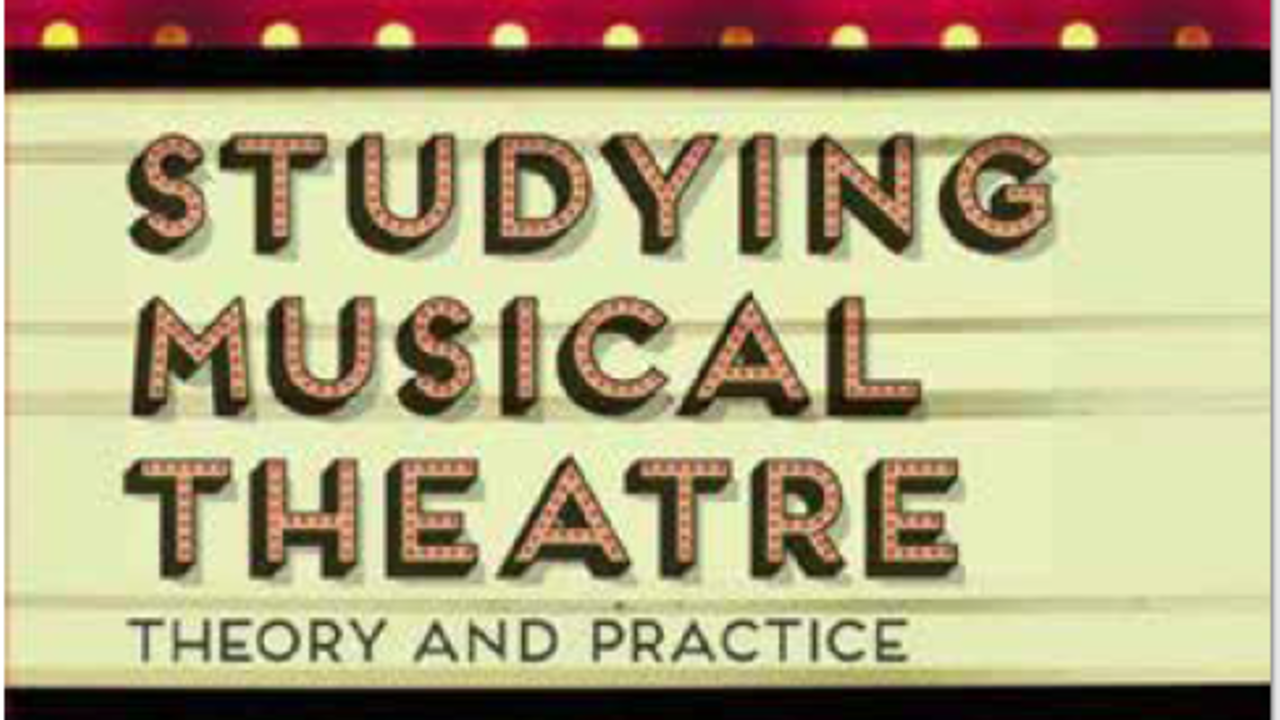 In Studying Musical Theatre: Theory and Practice, Millie Taylor and Dominic Symonds offer a musical theatre textbook that, rather than repeating the fairly chronological history found in many musical theatre texts, uses theoretical frameworks as an underlying structure. Throughout, the authors suggest throughout that musical theatre and opera are far more related than most musical theatre scholarship would suggest, and draw liberally from both fields for their examples.

Taylor and Symonds posit that musical theatre is a complex and deeply historical subject with both academic and real-world relevance. The authors repeatedly question, explain, and refer to popular narratives frequently taught in musical theatre classrooms; in light of this, the book is probably most useful for those who already understand the musical theatre genre and are seeking ways to expand their engagement with related fields and concepts.

The book is divided into four sections made up of a few chapters each. Though each section is clearly intentionally organized and the chapters occasionally reference each other, each chapter is also largely written as a stand-alone essay; this means that researchers or instructors can focus on a specific topic/chapter as needed. Each chapter introduces a critical perspective(s) and uses specific musical and opera examples to unpack some of the ways the theory can be fruitfully applied to opera and musical theatre. Chapters end with a resource guide for further reading and, in fact, one of the book’s primary strengths lies in the authors’ collation and interpretation of a dizzying variety of theorists and scholars.

Taylor and Symonds are at their best when translating challenging theoretical concepts into accessible summaries. Of the four sections in the book, Part I is the strongest. In it, the authors offer a comprehensive vision of the multiple ways audiences might interpret a piece of opera or musical theatre. Chapter 2, specifically, is effective; the authors’ explanation of the sometimes challenging concepts of semiotics and semiology are very clear, and they break down the many different potential planes of meaning in a work of music theatre or opera with well-selected examples that effectively model historical, musicological, and formal analyses. The engagement with cultural materialism in Chapter 4 is also a bright spot. Raymond Williams’ theories are concisely laid out, and the authors’ case study of the ways in which different sociopolitical contexts altered the received meaning of different productions of Cabaret is particularly well done.

In contrast, chapters in Parts II and III specifically dealing with the identity politics of marginalized groups are less effective. Though these chapters draw from important scholars in their respective fields and the concept summaries are generally effective, their organization is less logical. The chapter on orientalism, for example, is really about post-colonialism and racial and ethnic identities more broadly. Chapter 10, which engages with sex and sexuality (with a particular focus, for most of the chapter, on LGBTQ+ identities), is the weakest of the book. Atypically, Taylor and Symonds use “queer” throughout without fully unpacking the theory or layers of meaning around the word. The reader is left with the impression of a simple, slightly undesirable abnormality rather than the complex goulash of off-centeredness and unconventionality the theoretical term carries, or the fierce and intentional reclamation and celebration that often accompanies the term as an identity category. This limits the term’s usefulness within the chapter, and may be off-putting to the reader. Taylor and Symonds ultimately conclude that musicals with LGBTQ characters are seldom able to escape the spectre of queerness to achieve mainstream appeal. (The assumption that LGBTQ characters are written primarily with the goal of "humanizing" them for a straight and cisgendered audience is, on its face, deeply problematic.) The authors also (aside from Little Shop of Horrors) only analyze musicals where characters are diegetically and self-consciously performing their gender and sexual diversity (The Rocky Horror Picture Show, La Cage Aux Follies, Hedwig and the Angry Inch); they omit any analysis of musical theatre works where LGBTQ characters are much less intentional in their performance of queerness.

Studying Musical Theatre: Theory and Practice isn’t a conventional musical theatre history text. It is, however, an excellent resource for readers hoping to gain a deeper theoretical base and more fully consider the ways musical theatre and opera interact with the world around them.